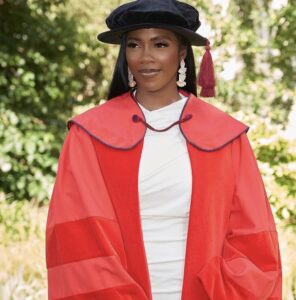 Tiwa Savage holding the mic, looking like someone filled with the Spirit of God, mentioned, I was thinking about Jesus Christ when I wrote my song “Somebody’s Son”

She added, people told me this song wasn’t going to make a hit because only females can sing along, men cannot sing somebody’s son, but I told them when I wrote this song I was not even thinking about relationship I was thinking about Jesus Christ.

Because He is the real somebody’s son, so I said to them people will relate to this song because if you’re a man or a woman we all need somebody’s Son “Jesus Christ”

Tiwa Savage born in Isale Eko, relocated to London at the age of 11 for her secondary education.
Five years later, she began her music career doing backup vocals for artists such as George Michael and Mary J. Blige.

After participating in the UK edition of The X Factor and graduating from Berklee College of Music, Savage signed a publishing deal with Sony/ATV Music Publishing in 2009.

After winning several awards, Tiwa Savage graduated recently as a Doctor(Dr) of Music

Model Kekeli PreLaunches Her Clothing Brand On Her Birthday